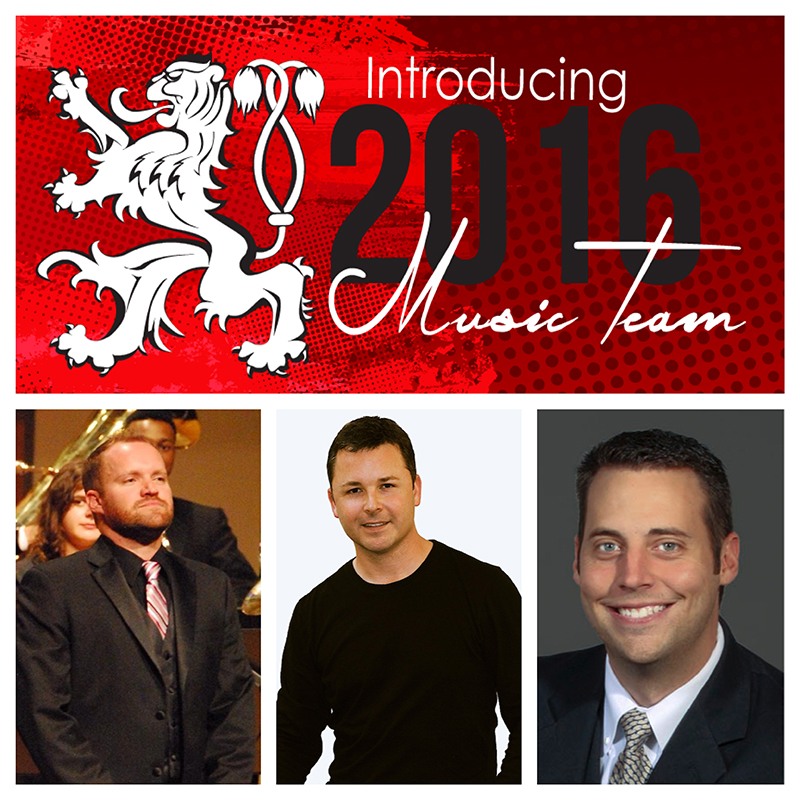 Introducing our 2016 Brass and Percussion Caption Managers! David Clemmer and Patrick Erwin are back to manage the 2016 brass caption and Ellis Hampton returns for this 6th season as Percussion Caption Manager. Corps Director Jeff Pearson states, “I am thrilled to have our musical team return this year. I really enjoy working with Ellis. He brings great energy to the corps and he is constantly challenging me and the corps to reach towards greater levels of excellence. David and Patrick were a great addition to the team last year. They bring significant experience as educators and they made significant progress with the hornline last year. I can’t wait to see the improvement in the second year of the program.”

David Clemmer joins the brass team as a music consultant and brass caption manager in 2016. Dr. Clemmer is the Director of Bands and Assistant Professor of Music at Eastern Kentucky University in Richmond, Kentucky.  In this capacity, Dr. Clemmer conducts the EKU Symphonic Wind Ensemble, oversees the graduate wind conducting program, and coordinates the athletic bands program.

Prior to his appointment at EKU, Dr. Clemmer served in residence at the Conservatory of Music and Dance at the University of Missouri–Kansas City, completing the Doctor of Musical Arts degree under the tutelage of Professor Steven D. Davis. As a wind conductor at the conservatory, Clemmer conducted the Conservatory Wind Symphony, the Wind Ensemble, and the Graduate Chamber Players, taught undergraduate conducting, and coordinated ensemble performances at the Midwest Band and Orchestra Clinic as well as the national conference for the College Band Director’s National Association.  As an advocate for new music, Dr. Clemmer worked in collaboration with world-renown composers, including John Corigliano, Zhou Long, Jim Mobberley, and Paul Rudy.

Dr. Clemmer served as the Associate Director of Bands and Director of Athletic Bands at the University of Kansas from 2006 to 2011.  In addition to conducting the Symphonic Band and teaching courses in music education, Clemmer oversaw all aspects of the KU athletic bands, including the Marching Jayhawks, the basketball bands, volleyball band, and various pep bands. Groups under his direction represented KU at the national level in the 2008 FedEx Orange Bowl, the 2008 NCAA Men’s Basketball Championship, and the 2008 Insight Bowl.  The KU Symphonic Band was featured by invitation at the Kansas Music Educator’s Association convention, a first for the ensemble in over two decades.  Prior to KU, Dr. Clemmer held similar positions at Sam Houston State University, the University of Texas at Arlington, and as the Associate Director of Bands at Newman Smith High School in Carrollton, Texas.  During his tenure as a high school director, Dr. Clemmer’s concert
ensembles received superior and best in class awards at state and national festivals, the marching band was selected to the Texas State Marching Contest, and the jazz program expanded toinclude two jazz ensembles, both consistently receiving top honors at regional and national festivals.

In the genre of marching and pageantry arts, Dr. Clemmer served as the Brass Caption Manager of the Santa Clara Vanguard Drum and Bugle Corps from Santa Clara, California, and taught ensemble music as a member of the brass staff of the Cavaliers Drum and Bugle Corps from Rosemont, Illinois. Through his teaching at the Cavaliers, Clemmer was a contributor to the instructional DVD entitled, The Cavaliers Brass: From the Concert Hall to the Football Field, which has been met with international acclaim. During his tenure from 2002-2009, the Cavaliers were awarded three Drum Corps International world champion titles and two Jim Ott Awards for “Excellence in Brass Performance.”

Patrick Erwin assumed the Director of Bands position at Hillgrove High School in July of 2013. He served as the Assistant Director of Bands from the school’s opening in 2006.  Under his direction, the Hillgrove Bands have thrived in one of America’s finest districts for music education, Cobb County, GA.  Most recently, the Hillgrove Wind Symphony was named a “National Winner” in the National Wind Band Honors competition for their recording of the Symphony for Band by Vincent Persichetti.  The Wind Symphony has also performed at GMEA State Convention, The UGA JanFest, and Music For All Regional Concert Festivals.

The Hillgrove band program currently serves 325 students daily, in 4 concert ensembles.  The school also has a 180 member volunteer marching band which has been a consistent top-10 finalist at Bands of America Regional and Super Regional  Events, being named a Regional Class AAA champion in 2012.

Mr. Erwin’s professional affiliations include Phi Mu Alpha Sinfonia Fraternity, GMEA, NBA, and MENC.  In 2014, Mr Erwin was named a “Hero In the Classroom” by the Atlanta Falcons, Suntrust Bank and the Symetra Corporation.

Dr. Ellis Hampton is currently the Percussion Coordinator and Associate Director of Bands at Guyer High School in Denton, TX. In addition to coordinating all percussion education in the cluster, he also serves as the Director of the Marching band, Winter Drum Line and Co-Directs the Jazz Band. Ellis earned his Doctorate of Musical Arts in Percussion Performance at the University of North Texas under Mark Ford and received his Bachelors and Masters Degrees in Percussion Performance at the University of Kentucky under James B. Campbell.

Serving in his sixth year as Percussion Caption Head and Arranger for the Boston Crusaders, Ellis is a sought after arranger, clinician and adjudicator for programs across the country. Prior to his time at the Boston Crusaders, Ellis served on the percussion staff of the Cavaliers Drum and Bugle Corps, the Phantom Regiment, the UNT Indoor, the University of Kentucky and Metro Alliance Indoor Percussion.  Holland states, “Ellis has consistently provided us with a percussion style that is exciting and colorful. I can’t wait to hear where he takes the 2016 program.”

Outside of the marching arts, Ellis has a wide array of interests and performance experience. From co-founding the UK Percussion Quartet and the Los Gatos Locos Salsa Band to his passion for world music including Gong Kebyar, Gamelan Anklung, Steel Band, South-Indian and Afro-Cuban music to his roots as a symphonic and Avant-garde percussionist, Ellis brings a unique and diverse perspective as a composer/arranger and as an educator.

Ellis is an endorsee of Innovative Percussion, Zildjian Cymbals and Evans Drum Heads.

YOU CAN REACH OUT TO DAVID, PATRICK, AND ELLIS:

REGISTER TO BE A CRUSADER TODAY! WWW.JOINBOSTONCRUSADERS.COM