On Sunday, the Boston Crusaders brass line wrapped up the second of two brass camps that were both held in the Atlanta area. The members worked on three pieces of music for the 2016 production that is designed around Don Quixote. Everyone at the camp was excited about the progress that was made both visually and musically. Eddy Falcon, the 2016 visual caption head, was on hand to oversee the progress and to provide valuable input for the performers. In addition to the work that was done on the show music, the brass staff continued their focus on the fundamental foundation that they have been working on since last season. The members are very excited about the show and their enthusiasm was very evident in the way that they approached the rehearsals during the camp. The next camp will be a full corps camp and it will be held at Lakewood Ranch High School in Florida on April 22,23 & 24. The corps will be holding final color guard auditions at the April camp. 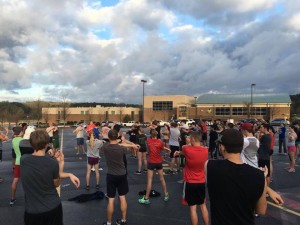